With an increasing number of EPMS clients producing folded cartons and other nested products we determined that it would make sense to enhance our interface to the Insoft IMP imposition automation tool in order to improve the process of estimating folded carton layouts while estimating in EPMS.  As such we recently completed an enhancement in our E4 – Eclipse version soon to be released that will allow the user from the Component Layout tab in estimating to be able to launch IMP, attach files to send to IMP and have IMP generate the folded carton (or other nested products) layout for the user.  This will save the estimator from having to input the carton dimensions and the press layout and manually override the number UP on the press.  Insoft IMP will calculate all of that and hand off that information back into the EPMS layout.  Previously a user would have to go offline to figure out the number up in another application (such as CAD) and manually input the number up.  With this enhanced interface to IMP a user of both applications will now have the results at their fingertips.  Below is a sample screen shot of this in action. 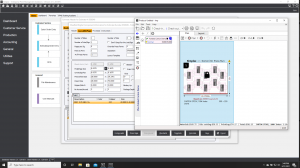